The overall vision for the new kitchen was a sleek, fresh and more contemporary space: The homeowners wanted a functional kitchen that was also inviting and that blurred the lines between their kitchen and living space in the adjoining family room to create an open and airy feel.

Our designers and architects worked to create a new kitchen design that included a 4-ft. addition; a larger window over the sink; and removal of the existing single door, replacing it with a full sliding-glass door for added light.

A structural challenge presented itself early on. There was a
load-bearing post designed into the end of the new island, which
the homeowners did not want. We 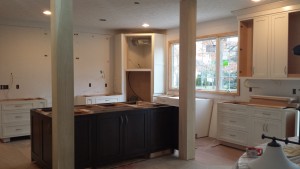 consulted with an engineer and came up with a solution that involved extensive structural work, including digging a footer in the basement and installing posts and beams for adequate stability.  However, when the homeowners looked at their neighbor’s kitchen, which Dover had recently completed with a similar structural post situation, they changed their minds and decided to keep the pole, which we disguised using decorative columns.

Another interesting challenge involved the stove hood.
Because the new kitchen was substantial in size—and because
they liked industrial-grade appliances—the 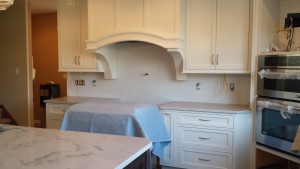 homeowners had selected a large, 1000 cfm exhaust hood. Due to its size, the hood moved so much air out of the home that it did not meet the building code requirement. Our team worked with the city inspector to value-engineer a new solution that incorporated a natural flow air system instead of installing a second furnace—which would have been costly for the homeowner.

Moving on to the final build-out phase in my next post, you’ll see how we put all of the pieces together – combining the homeowners’ design cues and selections with our master carpenter’s craftsmanship – to create one fabulous new kitchen.

All the best,
Chika Aizu