This young family of five had a beautiful, eclectic home—but with one room that just didn’t seem to fit. The dark, dated kitchen had an awkward multi-level island that consumed most of the room and a huge double-oven corner cabinet that made the remaining space cramped and unusable. They wanted a stylish, updated kitchen built for everyday life, from homework to dinner parties, and everything in between.

They partnered with Dover Home Remodelers to breathe new life into their kitchen, opting for a lighter, brighter modern kitchen—a project that earned Second place in the prestigious NARI Contractor of the Year (CotY) Awards 2020 for Kitchen Renovation: $100,001 – $150,000.

For their new kitchen, the two busy professionals and their three children wanted a complete refresh with an airy, modern profile. Their wish list included an open, streamlined layout that made better use of the existing space with more work areas and storage, a functional island with room for seating, high-end appliances, and subtle use of textures and colors to give the room timeless style.

The kitchen needed a major makeover: The multi-level, bar-style island was not ideal for children or for entertaining. The monstrous double oven filled an entire corner of the room. And the dark cabinets, Corian surfaces and dated fixtures had to go. 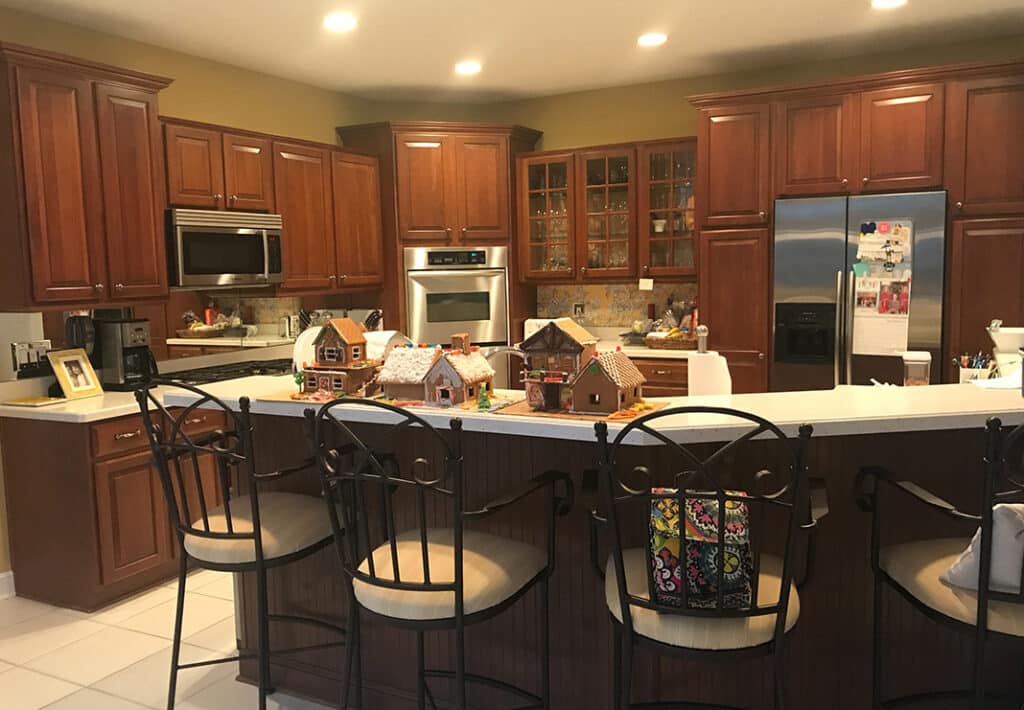 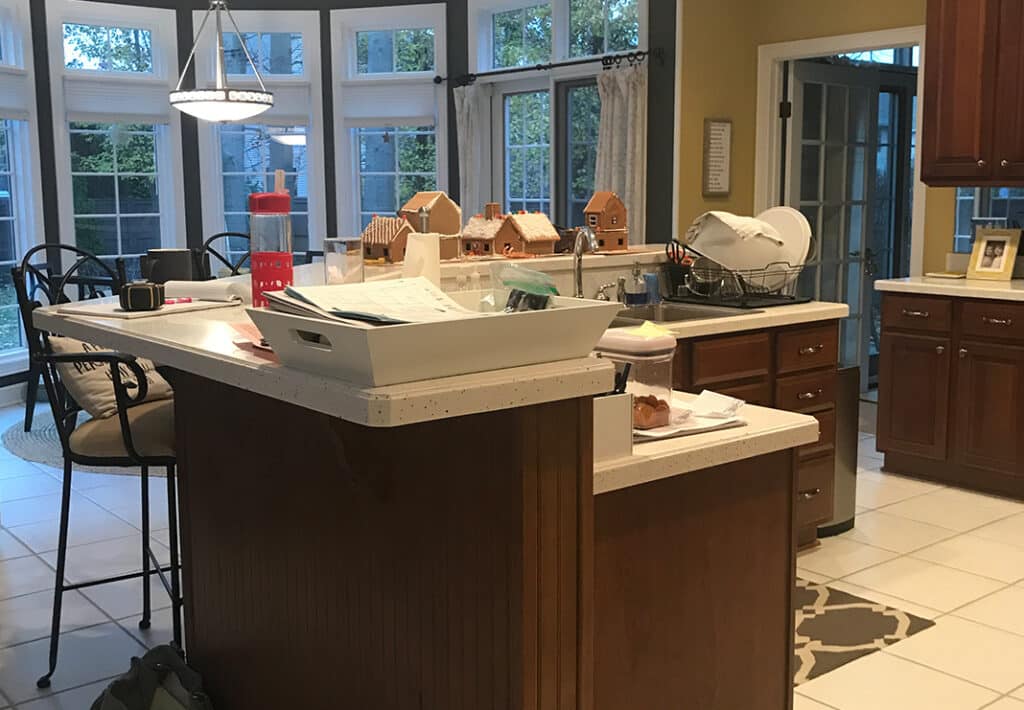 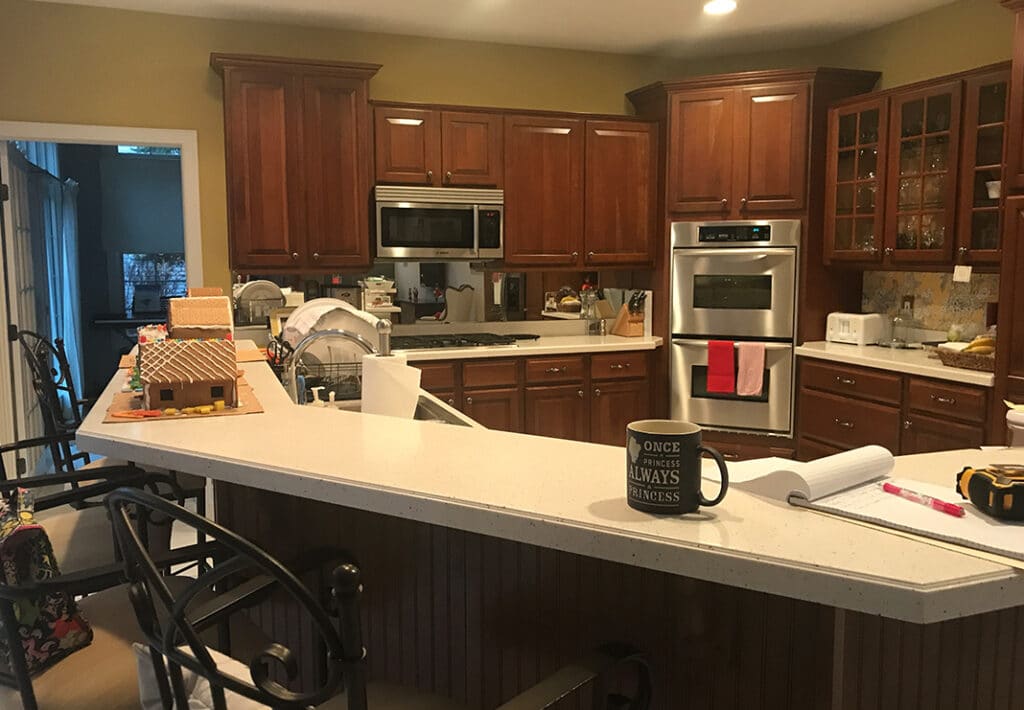 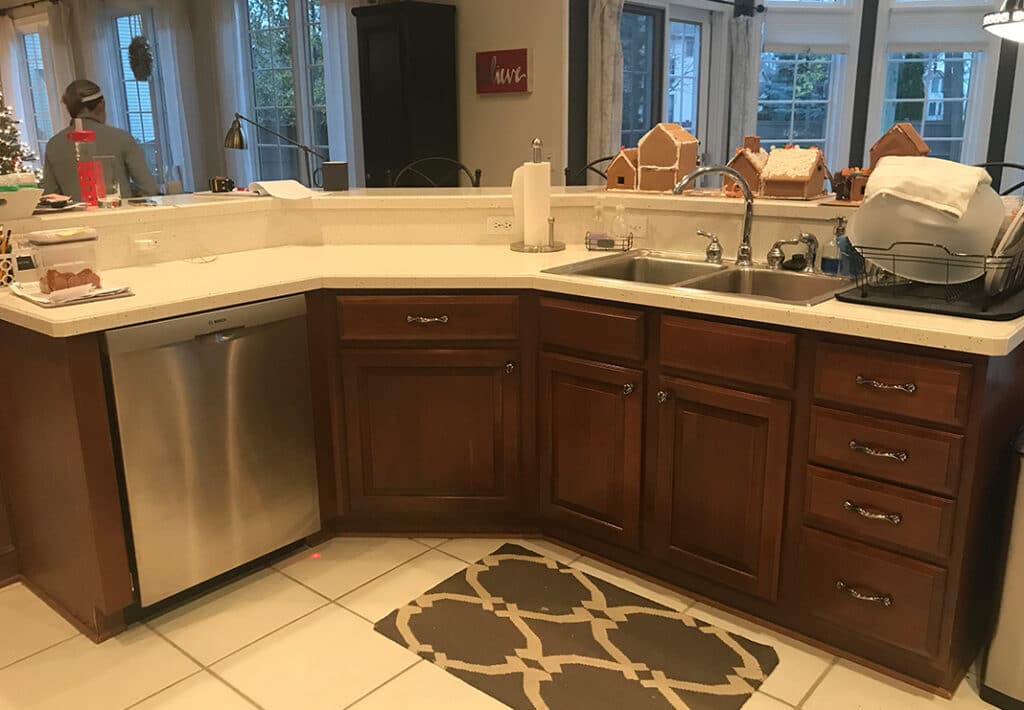 While the kitchen’s aesthetic was outdated, its existing footprint was the ideal size and configuration (it was already an open-concept space). No knocking out walls. No add-on space required. 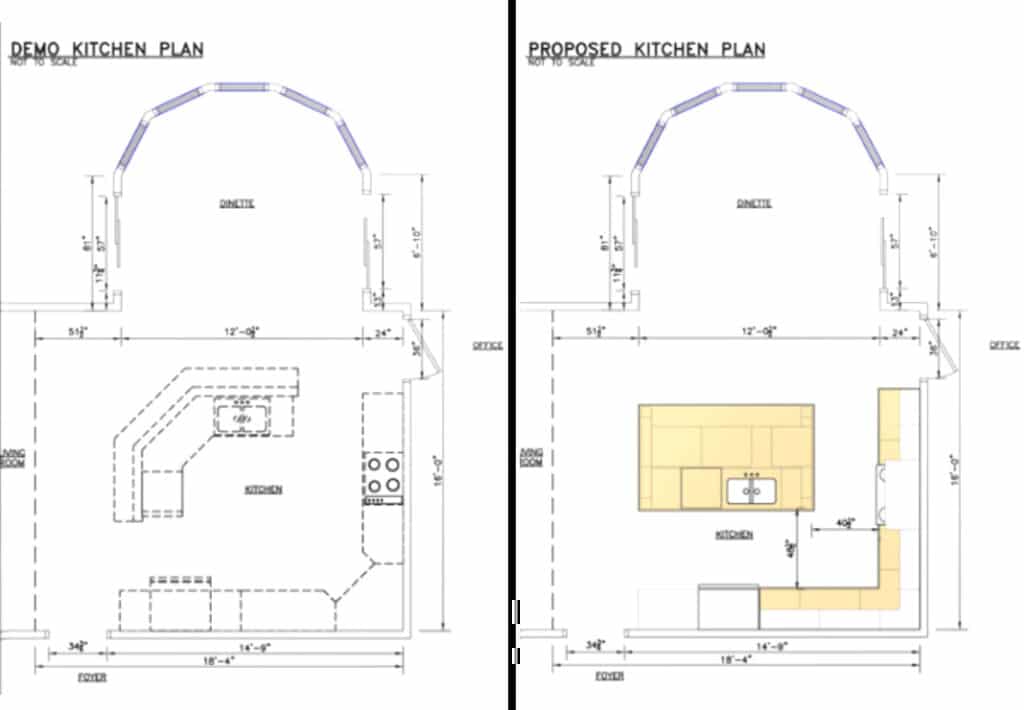 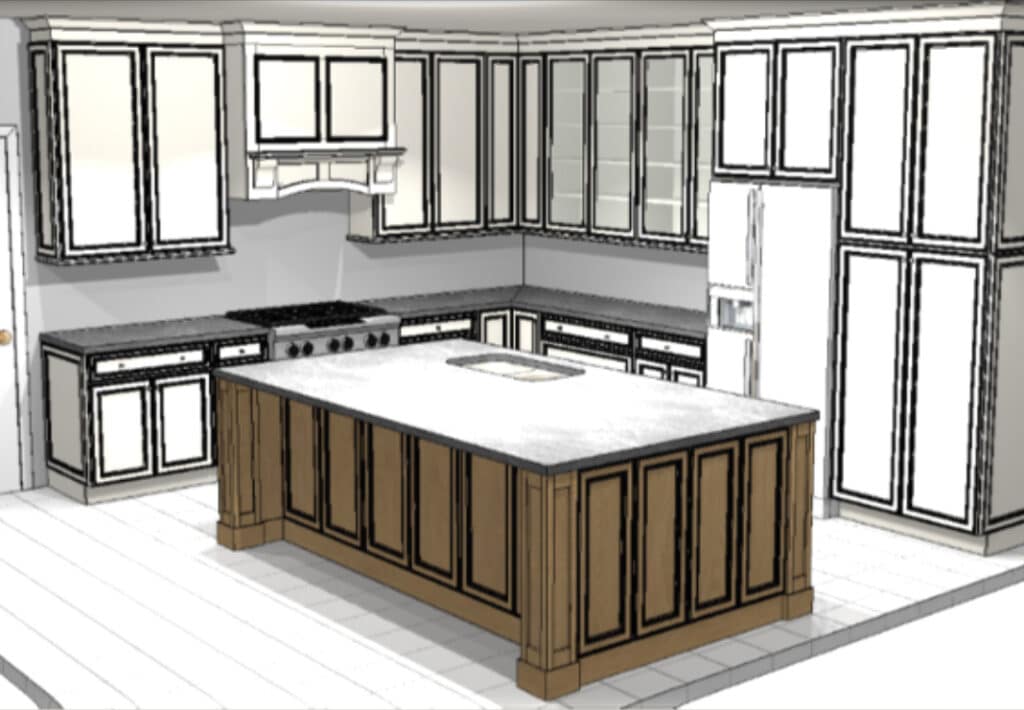 The demolition took the kitchen down to the wall studs and sub floor, where we discovered that the large corner cabinet (which previously housed their double oven and angled wall) was hiding the main heat run to the second floor. We resolved the issue by relocating the duct work, preserving the new kitchen design. 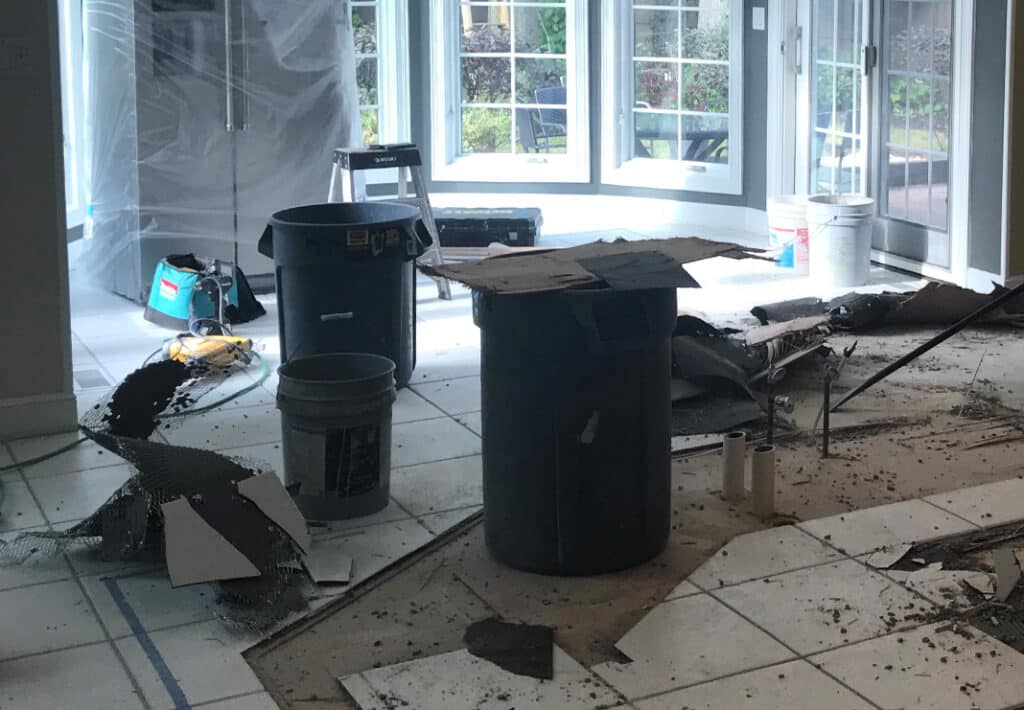 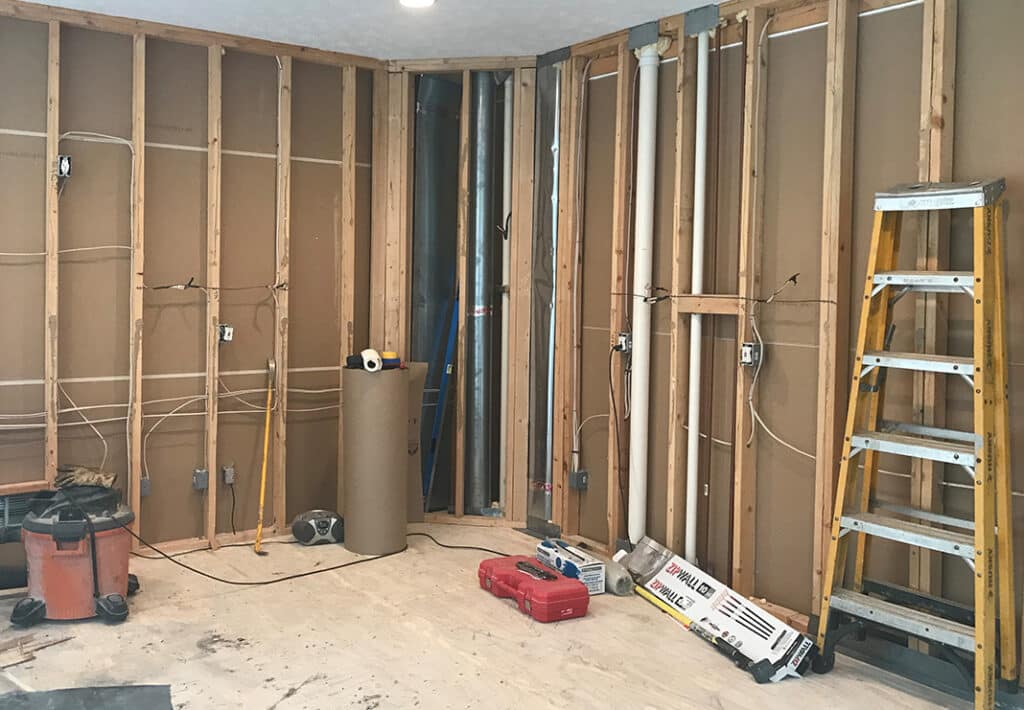 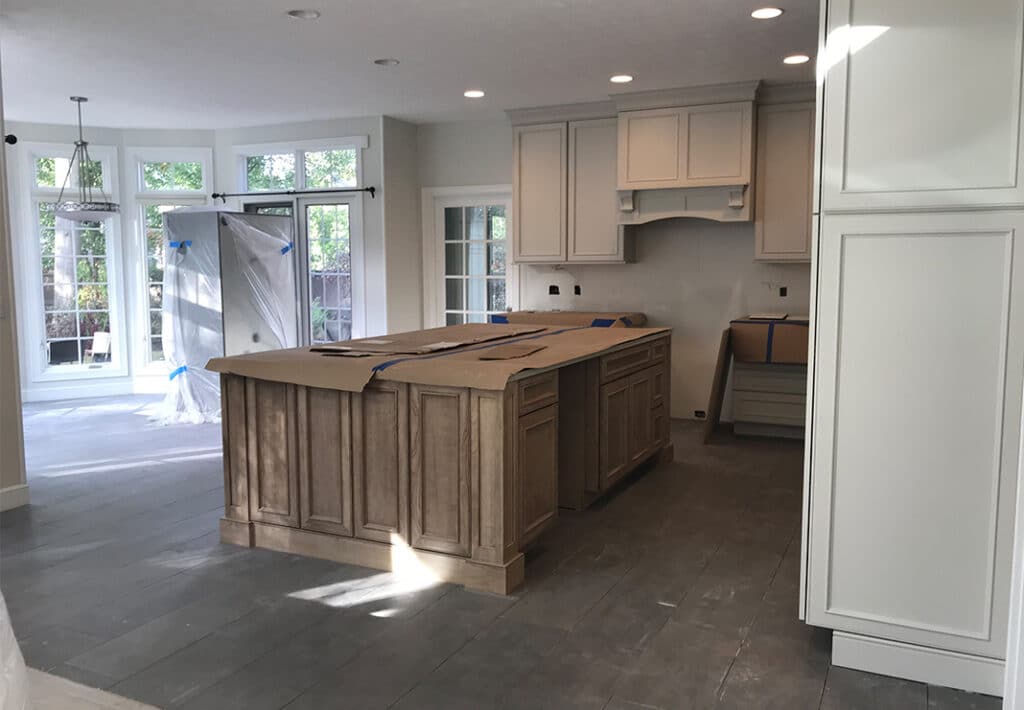 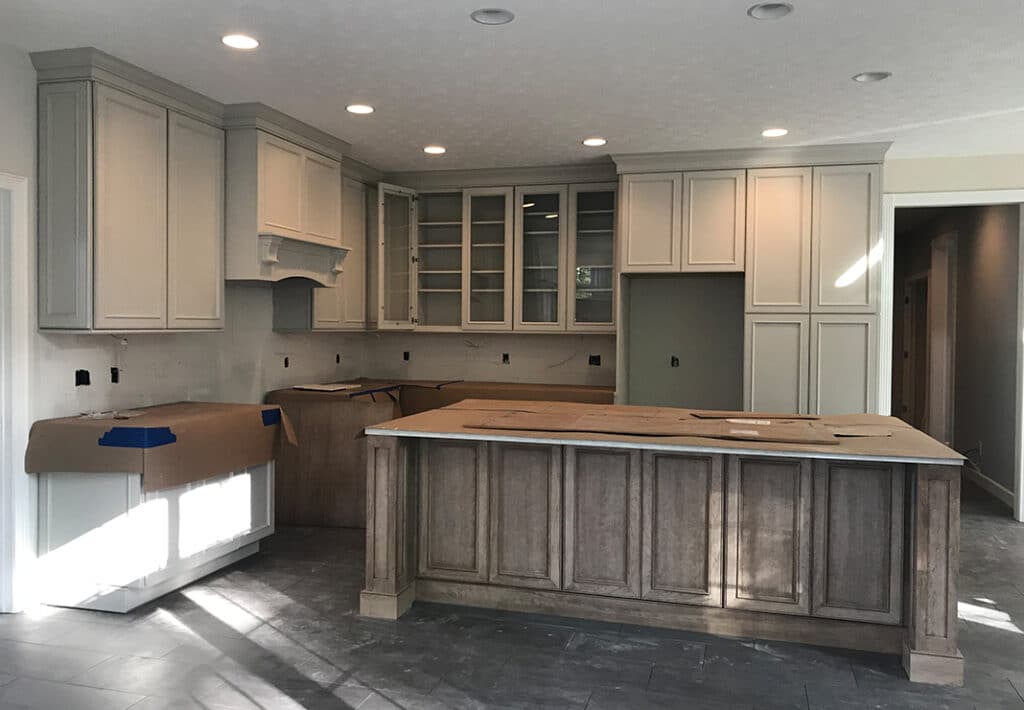 With a light, yet warm airy feel as the inspiration, we selected Medallion Goldline cabinets in Irish Crème for the perimeter, stretching them to the ceiling for added functionality. Sleek quartz surfaces (Rocksolid Stoneworks Corian Quartz in London Sky) are the ideal neutral with a stone backsplash (Altura Stone & Tile – Alba Vera Honed Picket Mosaic) that adds subtle texture. To create consistency in the home, the floors were updated in the kitchen, mudroom, laundry room, half-bath, hall and foyer to all coordinate (Moncibec Ceramica Modern 12″ x 24″ tile in dark grey). 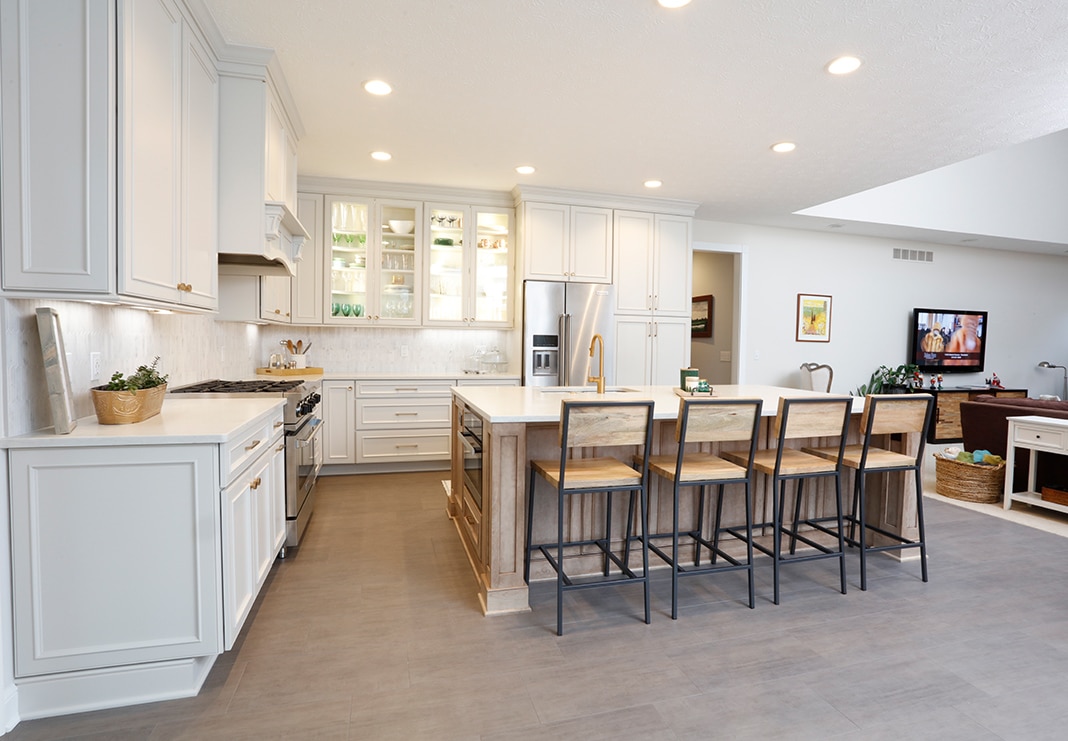 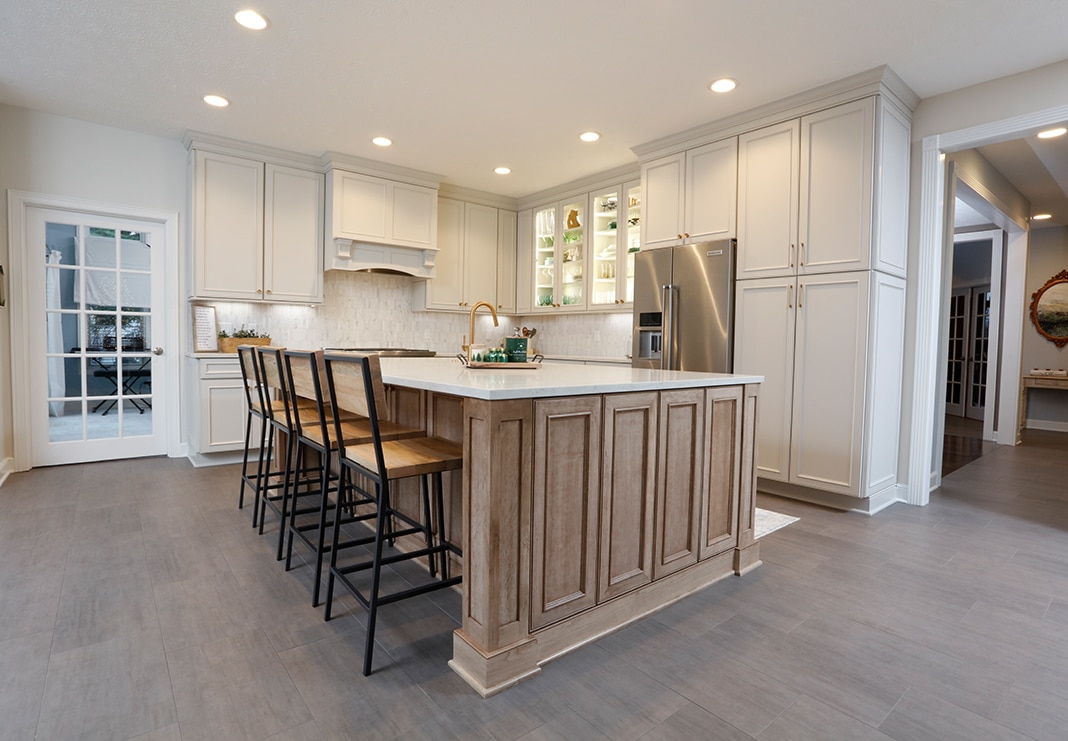 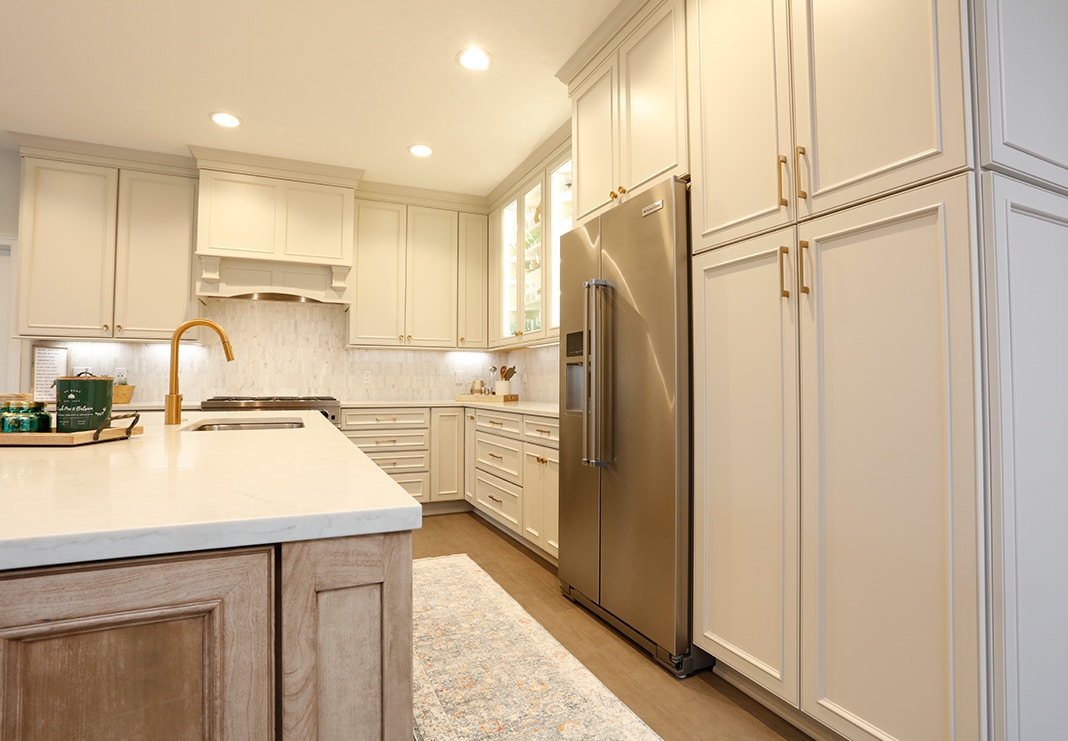 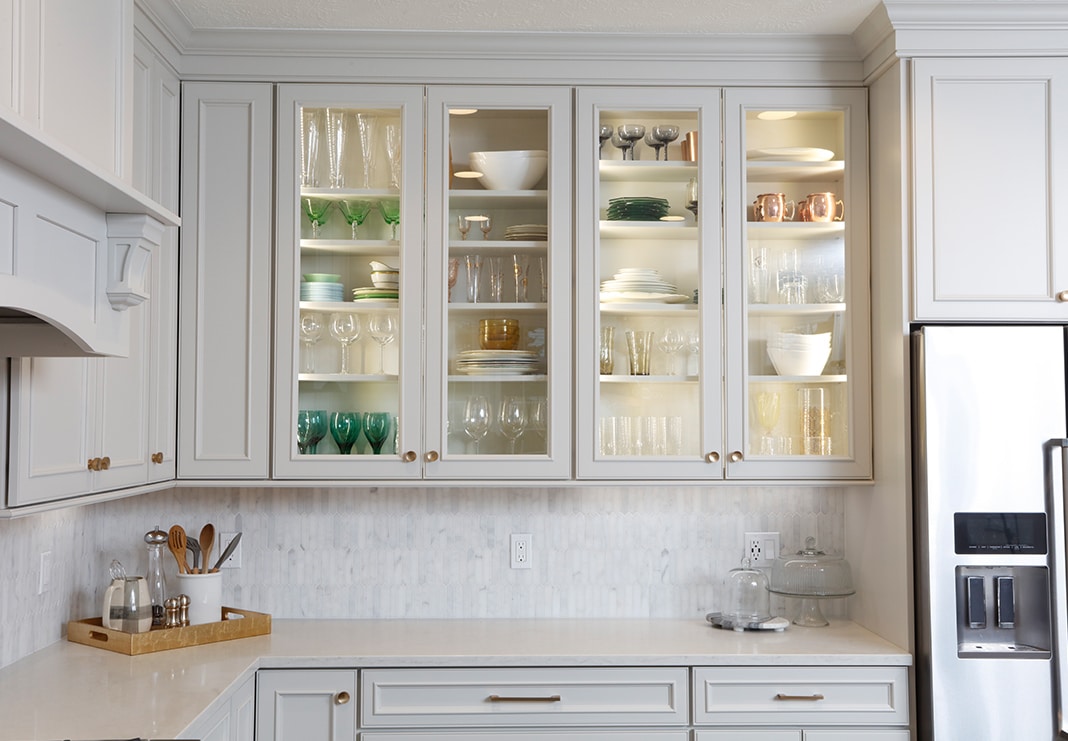 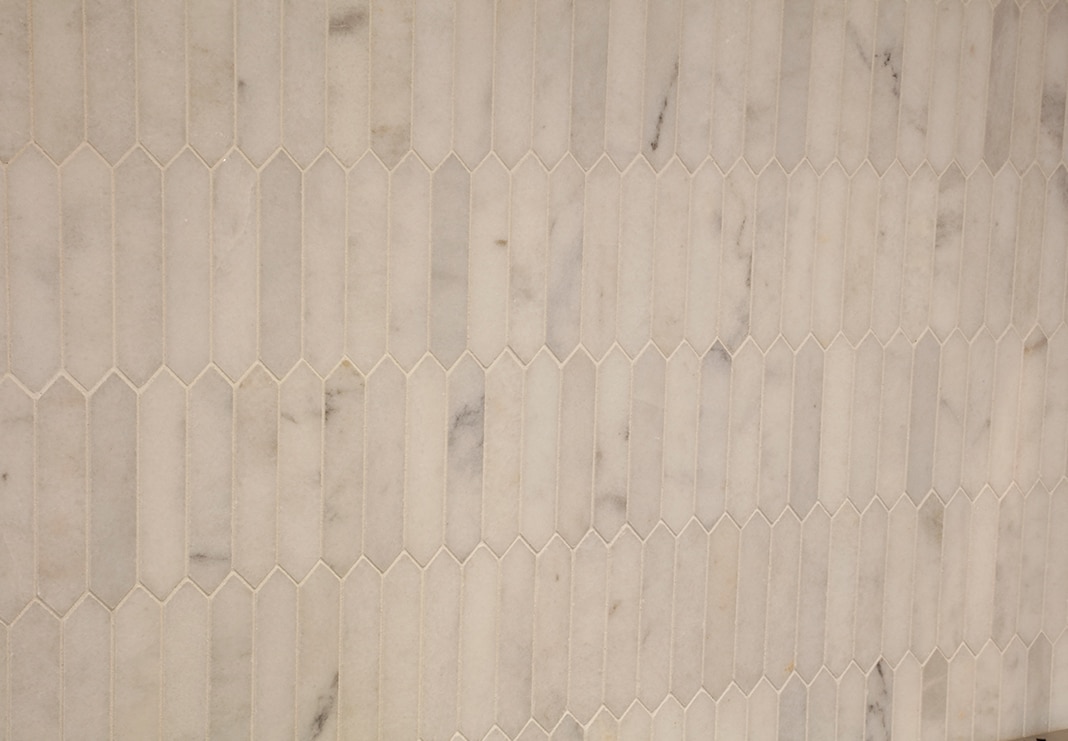 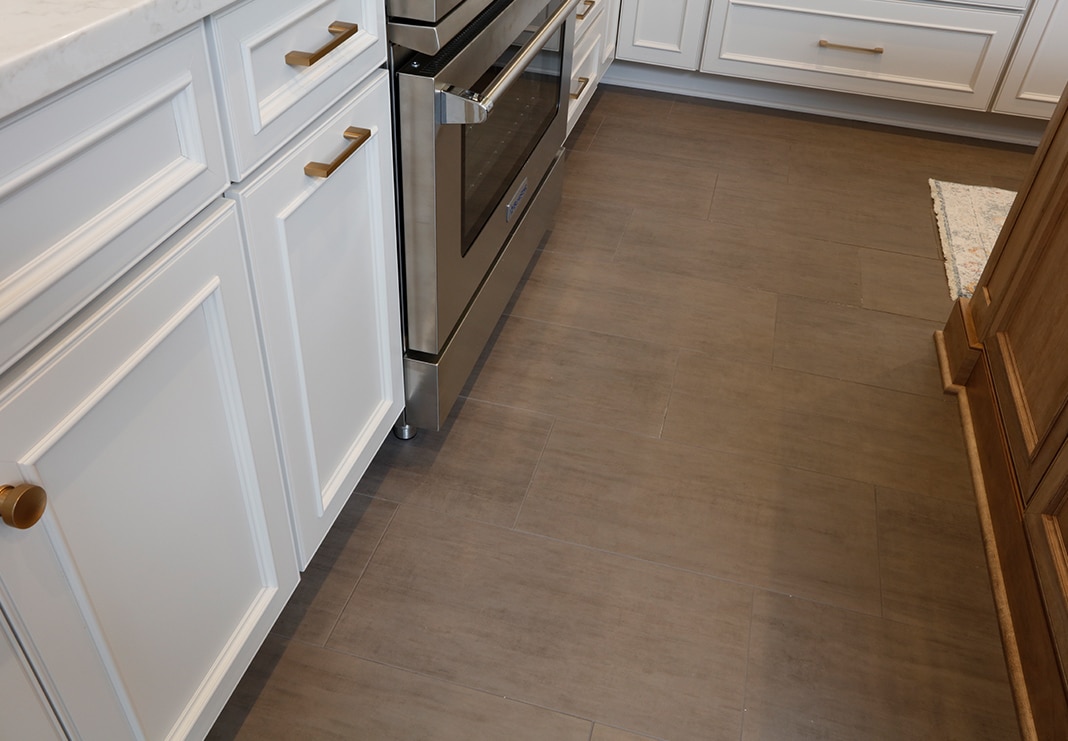 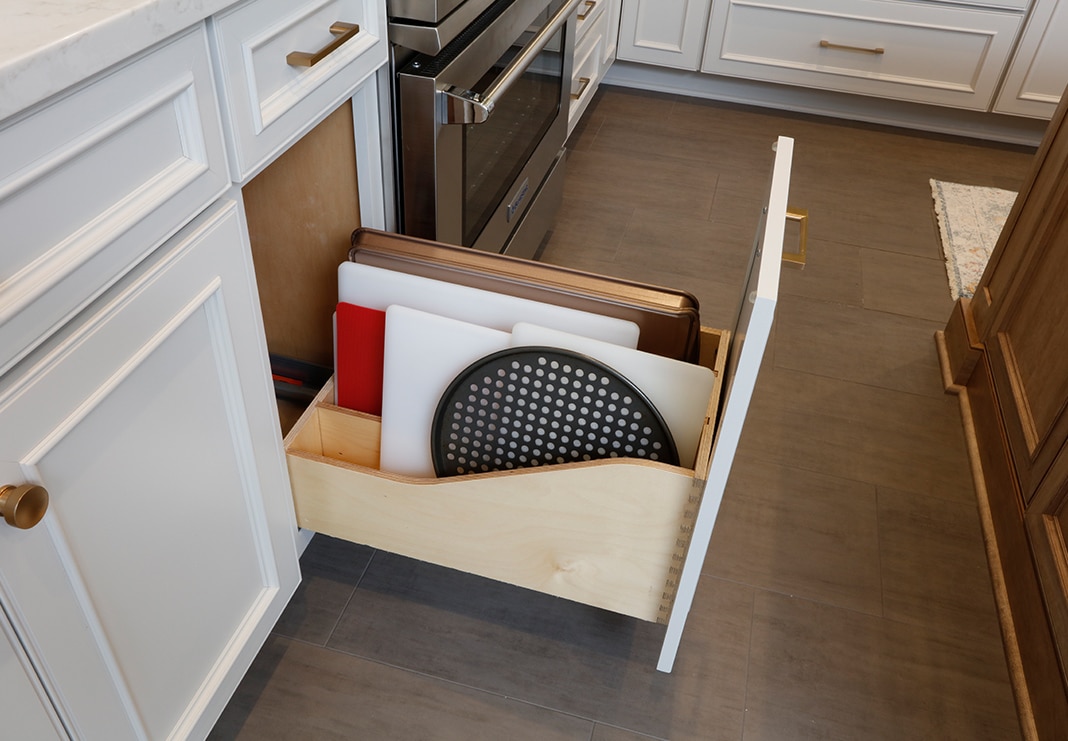 The original cabinet layout was designed to incorporate a 48″ commercial range as the showpiece. The cost of the code-required rangehood was steep, so the homeowners decided on a 36″ Blue Star RCS Series Professional style range instead which saved them money, while still giving them the look they desired. 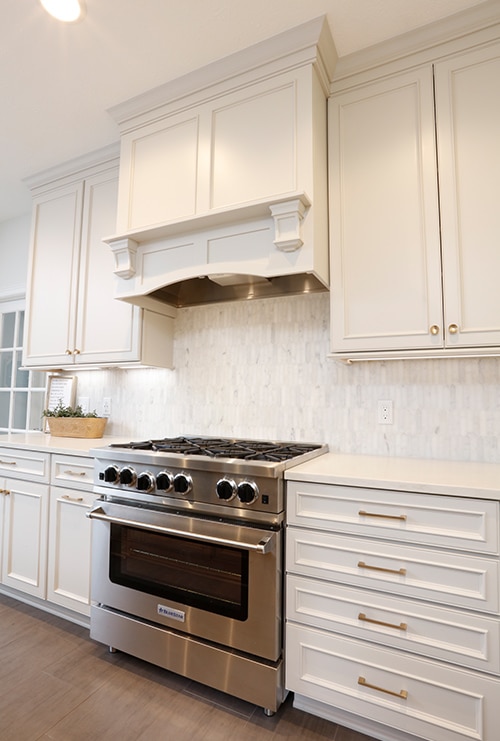 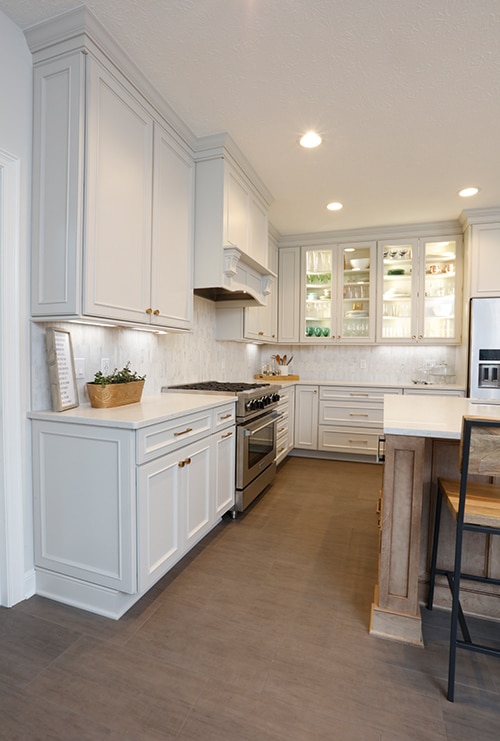 Because they were losing the second oven by downsizing their range, we added a 24″ Miele Pureline Speed Oven built into the island which serves as a microwave, a convection oven and a second conventional oven for baking. 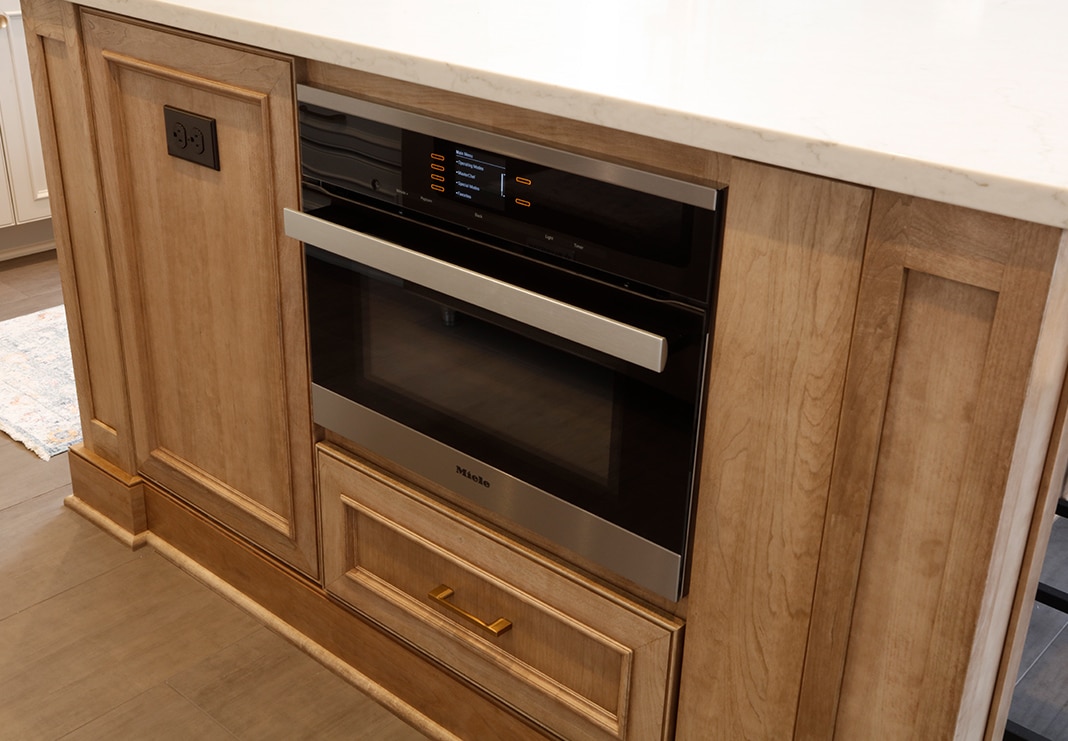 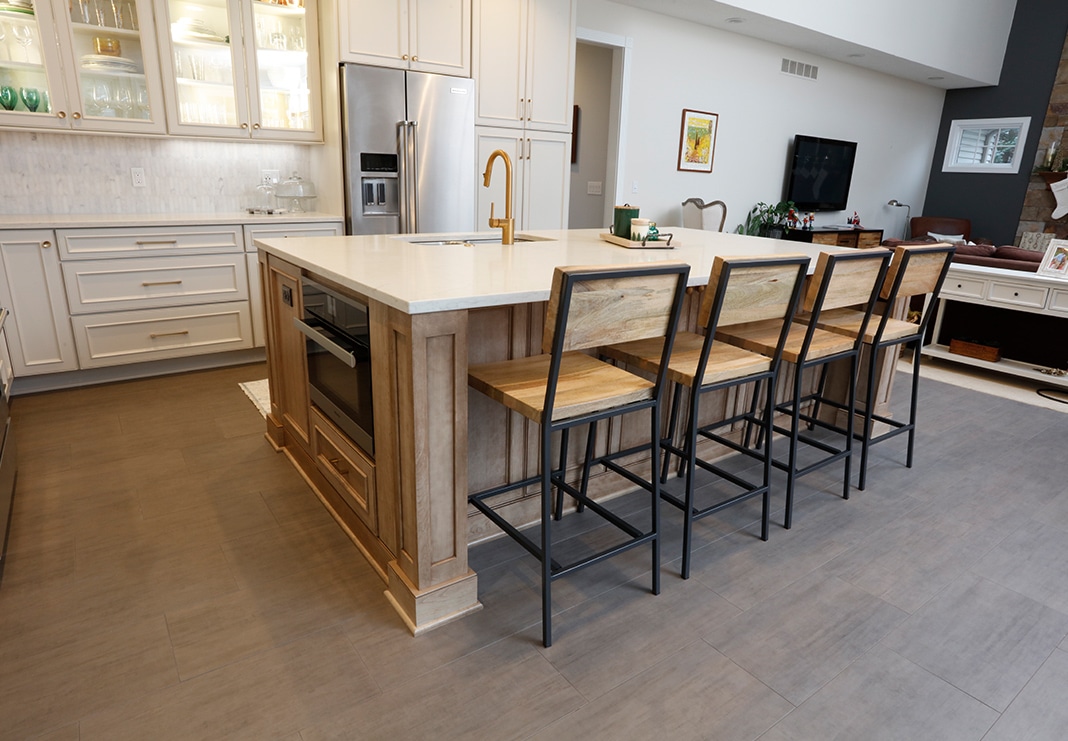 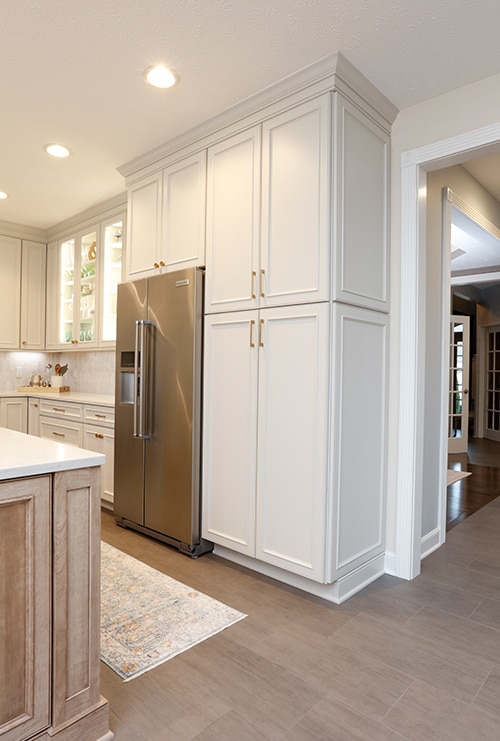 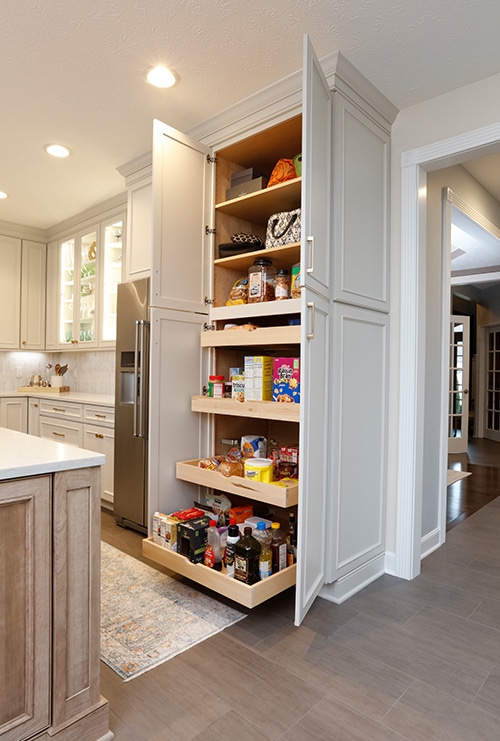 The new island is the perfect balance of beautiful form and function—it provides plenty of workspace, contains a large single-bowl stainless sink and extra oven, includes seating for four to five people, and is loaded with smart storage options on two sides. The island showpiece stands out from the perimeter cabinets, as it is constructed from Medallion cherry cabinets with a distressed cappuccino finish. Custom panels and posts give it a furniture look. 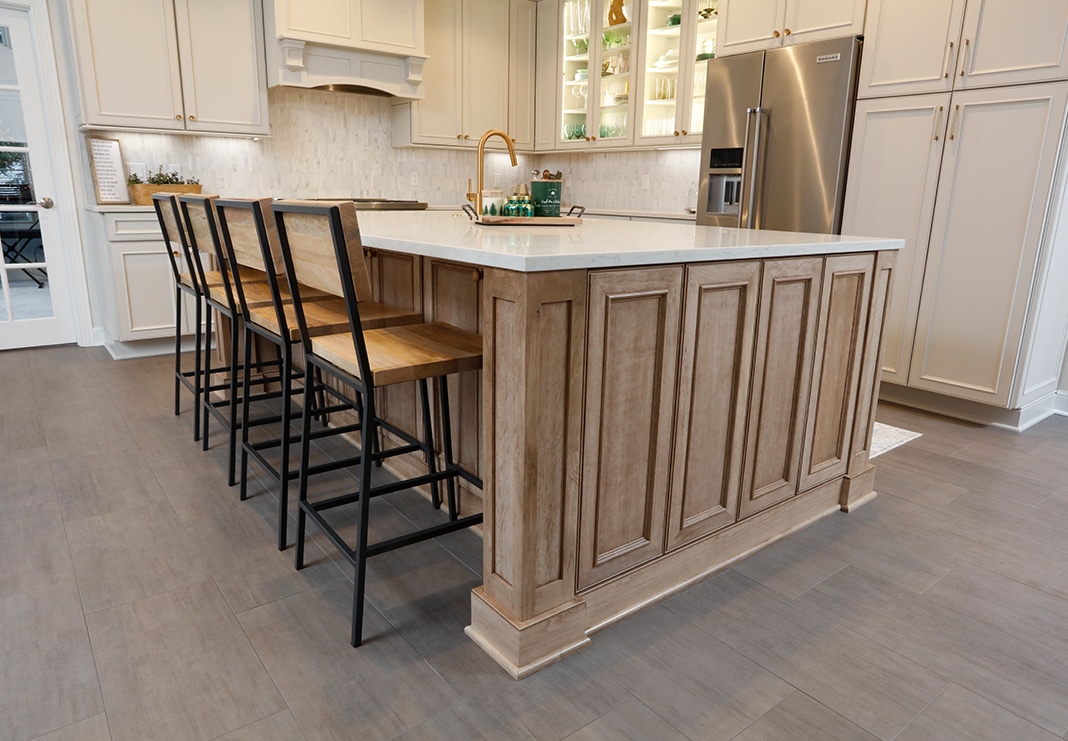 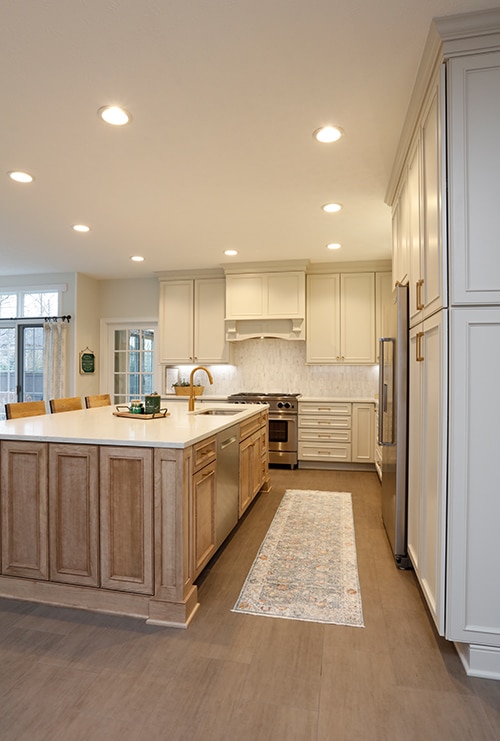 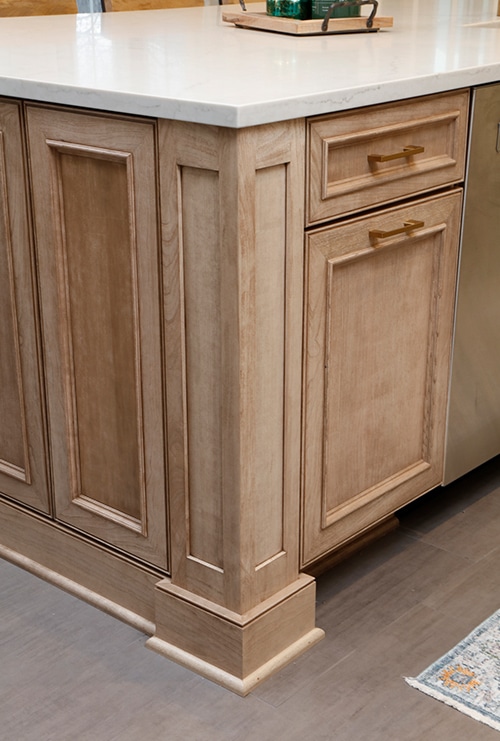 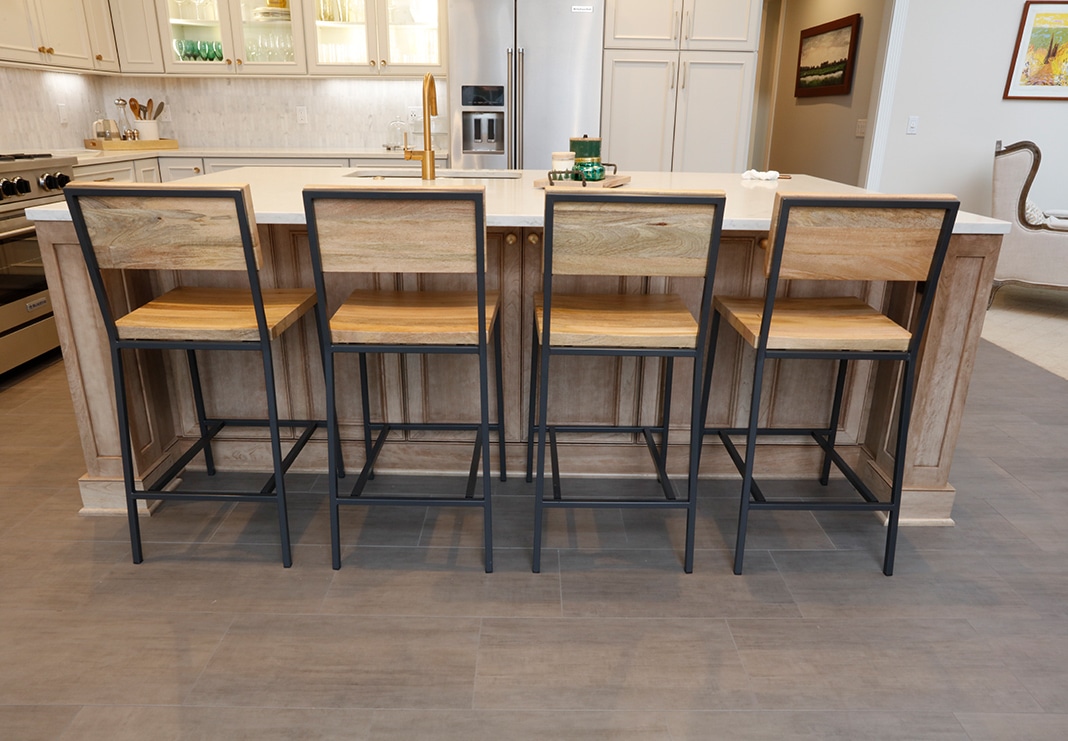 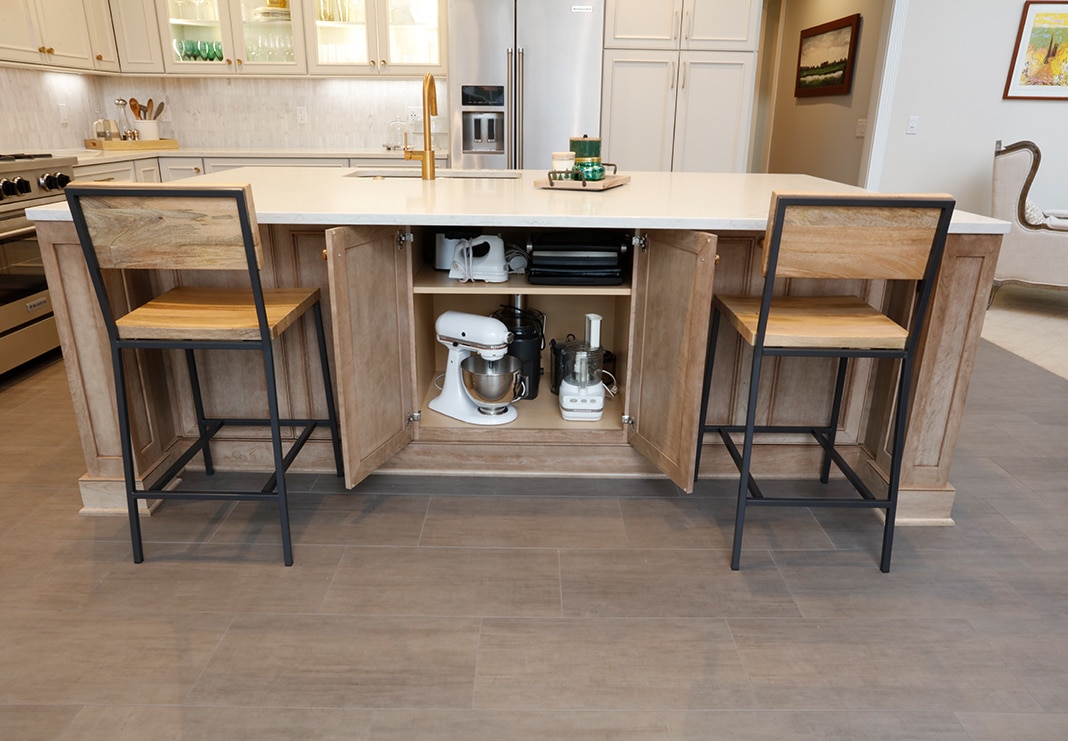 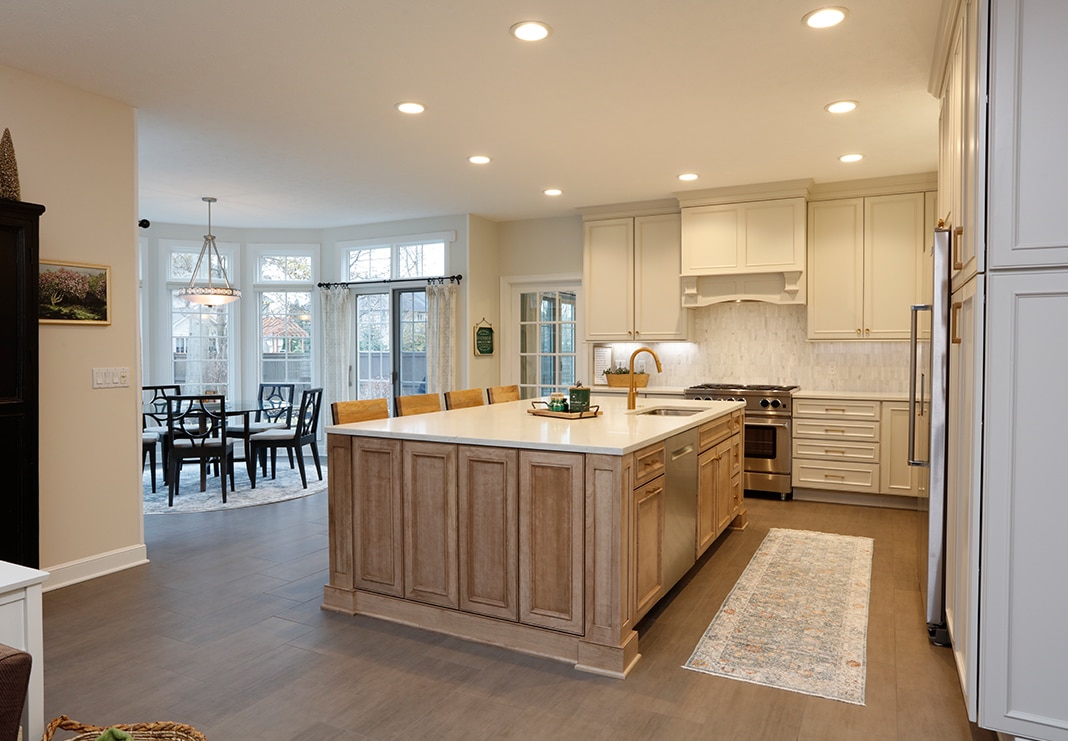